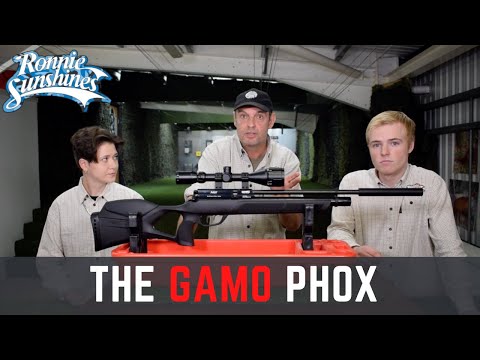 What amazing value, this pack is by far the most cost effective way into PCP ownership..without a single compromise. It includes the outstanding Phox rifle with moderator, a 3-9x40 scope and mount, rifle slip and stirrup pump, just add pellets and you have everything you need.

The Rifle
The Phox itself is in many ways a cousin to the hugely successful Gamo Coyote, it's similar but not the same...it uses the same bolt action (built with the help of a famous British factory in Birmingham), the same 10 shot magazine and the same SAT® adjustable two stage trigger. Like the Coyote it also has a cold hammer forged barrel but it's 115mm shorter making the Phox a carbine. The barrel has been screw cut to take a moderator and one is fitted, so overall the rifle is 80mm longer than the un-silenced Coyote. The air cylinder has also been shortened to make the gun nice and nimble however it will still give you 60 shots per charge. Finally the new ambidextrous synthetic stock is just as rugged but no longer features an adjustable comb.

The Optic
The Gamo 3-9x40 scope has variable magnification (3-9x) and a 40mm objective lens. It features a duplex reticle and comes pre-fitted with an ultra solid one piece mount.

The Pump
This new Gamo stirrup pump has a gel filled gauge and all the attachments you need to fill your rifle. A little effort is required but nothing too strenuous and it will take only a minute or two to fill a completely empty Phox.

Phox Specification
Shots per fill: 60
Length: 110cm
Weight: 3.5kg (including scope)
Made in the E.U